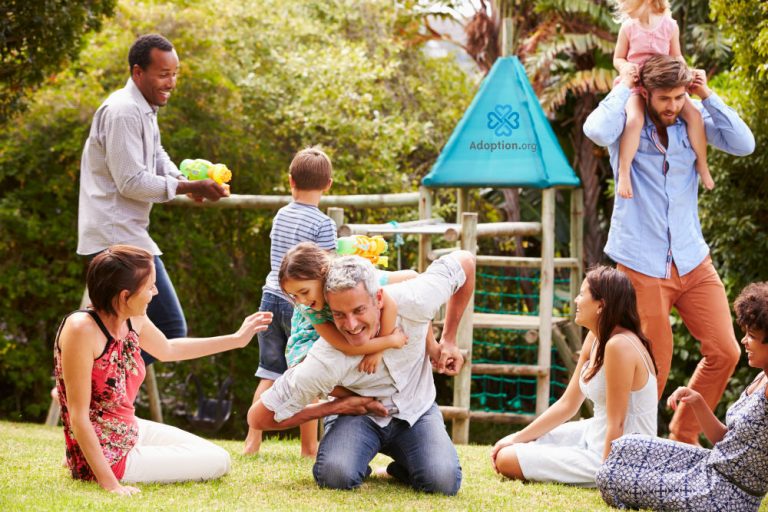 The adoption triad is a triangle symbol that demonstrates the relationship between birth parents, adoptive parents and the adoptee in an adoption. The triangle shows an equal connection between the adoptee and the adoptee’s two families. First, let’s explore each part of the triangle, and then we can talk about why I feel it is so important.

The birth parents, or sometimes referred to as “first” parents, are the biological parents of the adoptee. Sometimes there is not a lot known about the birth parents. We adopted our son as an infant and have a very open relationship with his birth mom. However, we do not know anything about his birth father. As this article continues, I will share more and more on why I think an open adoption is the best for the adoptee. In some cases, there is nothing you can do about knowing the adoptee’s birth parents, whether it be because it is a closed adoption or the information is just not available, like in our case.

That’s us! The adoptive parents are the parents that will take full parental and legal custody of the adoptee. I remember at our son’s adoption hearing the judge make a point to explain to us what it meant to legally have custody of our son. He was asking questions of us and explaining that it will be as if he were born to the two of us. His birth certificate will list the two of us as his mom and dad. I think in that moment, I cried the happiest tears I have ever cried in my life. As an adoptive parent, he is right. You take full responsibility in raising the adoptee, as if he/she was born to you, no questions asked and no turning back.

Why is it Important?

We had spent two days in adoption training the first time we were in the process of adopting. We attended another two days the second time we were going to adopt. In each and every single one of these classes, they talked about the adoption triad and why it’s important. The first time they discussed the adoption triad and why it was important, I didn’t really understand the depth of it. It was as if I was learning a foreign language and didn’t quite understand the meaning. Then, we adopted our son, Jackson. I get it now. I understand the importance. But I had to live through it first to fully understand why it is so important.

When we first started our adoption process, our adoption agency informed us that they only did open adoptions. I didn’t want that. I didn’t want the birth mom, birth dad, or any other birth family member telling us how to raise our child. He/she was going to be ours. Period, the end of it.  Well, at least that was how I saw it. I thought they would want to control how much they saw our child or how we parented him/her. I didn’t want any part of it. Then, I continued to research and talk to other people who had been through the adoption process. I had a high school friend who was adopted as a child and received a letter from her birth mom when she turned 18. Other than that she didn’t know anything about her, and she definitely wasn’t part of her life. I didn’t want that to happen to our child either. It seemed like they would miss out on a whole life if we had “hid” the birth parents from him/her.

Then, we met our son’s birth mom. She, too, was not what I expected. Everyone will probably tell you that their adopted child’s birth mom or birth parents are the most unselfish people they have ever met. Well, I will tell you that our son’s birth mom is hands down the most unselfish person I have ever met in my life. She has opened my eyes to a brand new world I didn’t know could exist. Let me explain one of the reasons I feel this way. When she was pregnant with our son, she indicated that when she brought her other babies home from the hospital she would talk to them, because they knew her voice and it would bring them comfort. She was worried, however, that our son would not know our voice since he was growing in her belly and we weren’t always around her. She wondered if there was a way that we could record our voices and she could somehow play it for him. Who does that? Who thinks so little about themselves and thinks about such a little gesture. That is not the only thing she has done to prove to us that she cared more about her unborn son than she did herself. In those moments I knew she was beyond just our son’s birth mom. She was someone who loved and cared for him just as much as we did, if not more. She had to be part of his life.

So back to the adoption triad and its importance. Since I have already explained what it is, let me express to you why I think it is so important. As I explained above, the child is at the top of the triad, or the triangle. Which means they must be the most important aspect of the adoption. I thought I had a pretty good grasp on understanding that. I think every parent, whether natural or adoptive, will agree that their child or children are number one. You put their needs before yours. I understood that. What I didn’t fully understand was how important that was in an open adoption. Open adoption is beautiful and I believe is very crucial for the adoptee. But it is also hard. It is opening your life to another family. It is allowing that birth family access to your child. It is allowing that birth family to love your child. It is complicated. It has its moments. It takes a lot of courage. It takes a lot of explaining.

This open adoption is the pure definition of putting the child first. After we (really more me than my husband) grasped that our adoption agency only pursued open adoption, we developed a love for wanting to have an open adoption with our child’s family and the importance of his birth family in our lives. Why?

Because it truly is what is best for the adoptive child. I have no idea what it would feel like to be adopted because I wasn’t adopted. Our speculations are that there will be questions our child has that we simply cannot answer. We can do our very best to explain them but they might better be answered by his birth mom. We have that relationship that if those questions come up, he can ask her. We have the full medical history of our son’s entire maternal family. If something comes up medically, we can talk to his birth mom and family about it. When our son was born so many people said he looked just like my husband. To which we would look at each other and just smile. He really did look like my husband. But as he has gotten older, he doesn’t quite look as much like my husband as he did. He now has darker skin and curly hair (my husband is bald!). When he is around his birth family, he looks like them. He doesn’t need to question why he doesn’t look like his adoptive parents. He can clearly see he looks like his birth family. I think this is especially important as he gets older and understands skin color.

So many people have said, “You two are great for what you are doing.” We aren’t any greater than the next parents. We simply want what is best for our child. And at this moment in time in his life, it is that he knows his birth family. Maybe there will be a time when he doesn’t want anything to do with them. I will support that too. I sincerely hope that never happens, but we will support his decisions when he is old enough to make them. Some have even said, “Doesn’t it scare you that he has a relationship with his birth mom?” Absolutely not. I want him to be so confident in knowing that she chose us to be his parents that having a relationship with her will only solidify that confidence.

The adoption triad emphasizes the importance of putting the child’s needs first and foremost. It also displays the other two parts of the triad in equal parts, not one greater than the other. They are equal in size and equal in distance apart from each other. You can’t have one without the other, especially in an open adoption. Yes, we, as his adoptive parents, have full legal responsibility to raise this child. But, if you ask me, we aren’t doing it alone we are doing it with his birth family. I cannot tell you the number of times I have emailed his birth mom asking questions about how we could help him. How she handled certain situations with her other children. When we discovered our son had a heart murmur, the first thing we did was email his birth mom asking if there was any family history regarding this. When we discovered he was a sleepwalker, we emailed his birth mom.

To summarize, the adoption triad is a triangle symbol that represents the relationship between the adoptee, the birth parents and the adoptive parents in an adoption.  It is important because it is a constant reminder of the components of an adoption and the importance of putting the child first and foremost. It also reminds you that as adoptive parents, you are not in this process alone. You share in this responsibility with your child’s birth parents.