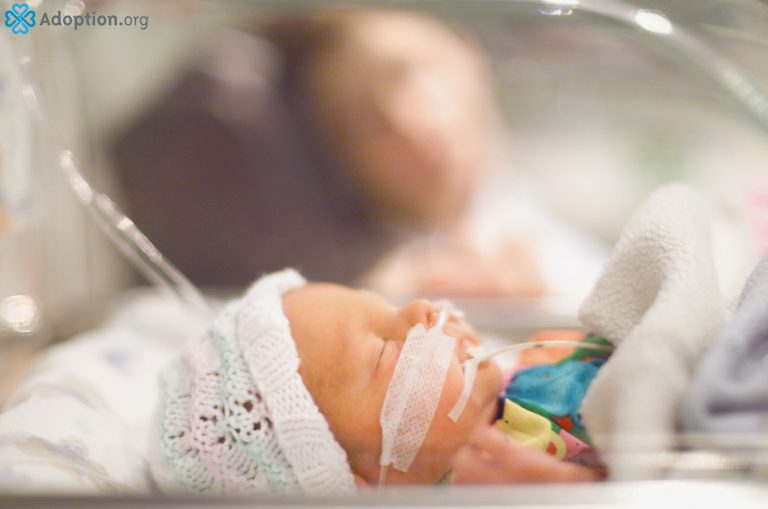 Though the length and law varies from to state to state, the revocation period in West Virginia, where I reside, is short and immediate. I couldn’t sign to terminate my parental rights for at least 72 hours after giving birth, but as soon as I put pen to paper, I no longer had rights. There was no turning back. This is a glimpse of the revocation period from my birth mother perspective.

As I laid on the surgical gurney, splayed open for all to see, I heard a sound that I initially thought was loud surgical equipment or the squawking of a baby bird: it was the first cry of my newborn son. I started sobbing–hard to do in the middle of surgery–and although I was numb, I began to feel empty. The doctors and nurses rushed to take little Liam’s Apgar score and clean him up, a small 4-pound baby. Before they wheeled him out the door to the NICU, they stopped at my head and let me see his face and his mess of brown hair. I vomited as soon as he was gone from my sight.

Back in recovery my nurse, who was named Brooke, extended the sweetest offer: Would I like to go see Liam for 10 minutes before we started a 24-hour round of medication that would leave me bedridden? That’s all I wanted was to see my baby. Though I was hazy from the anesthetic and pain medications, the adrenaline from the emergency C-section and the hormones already flooding my body made me crave seeing his face. I wanted to hold his hand and be in awe of this perfect little life that somehow came out of me. With the help of another nurse, they somehow navigated my massive hospital bed into the cramped space of the NICU where he lay. They had taken no time to hook him up to multiple tubes and wires and a CPAP helping him breathe as his lungs weren’t fully developed. As soon as they pushed me near him, I held his hand and stared. Ten minutes wasn’t nearly enough. When they began to take me back, I sobbed so loudly and so openly that everyone turned to look at me. I didn’t even care that I was making a spectacle; this was the first of many times I would have to leave without Liam, and I just wasn’t ready to do that.

When I returned to my room, Liam’s adoptive parents were there waiting for me as well as some of my family members. In one of the sweetest acts I can recall, Liam’s parents, Heather and Darren, only saw him for 10 minutes that day too. When they came back from seeing him for the first time, I was laying in bed with my aunt and cousin, crying. They took the cue to leave and come back tomorrow. Soon, my family left as well. Mike and I hadn’t packed a hospital bag yet, not expecting to deliver so soon, so he had to leave to get us clothes and things from home. I was all alone at that time, and I felt it. This was not the hospital plan I envisioned, drugged out of my mind from morphine, and without the baby I had just given birth to. I had all this time to think, and at that point, that was the last thing I wanted. The guilt of his early delivery set in, and all I could think was “How can I give him a good enough life when I can’t even carry him to term?” I didn’t fall asleep for hours, and when Mike returned, I made him go to the NICU to take pictures so I could see how he was doing.

The next day, after the 24-hour medication round had passed, I was able to go down in a wheelchair and hold him for the first time. At some point, Heather and Darren came to visit us. Liam was scary small; he hardly fit from my elbow to my left hand. And the tubes made it even more intimidating. I wanted to spend all my time soaking him up though. I argued with Mike and my nurses over not wanting to eat and not wanting to sleep because I wanted to be next to him. But they won in the end because I was too weak and too drugged to fight all that hard. To be honest, as much as I wanted to memorize every aspect of his face and get to know him as well from the outside as I had from the inside, it was too hard knowing the decision I was up against.

On Monday morning, I called the attorney handling my end of things to tell her about the delivery and decide when to sign the paperwork. She was out of town for the week and offered to set us up with an associate of hers. After talking to her, plans were made to sign on Friday, almost a week after he was born. I was to be discharged from the hospital Tuesday morning. That night, Mike and I sat in my hospital room and sobbed. Could we do this? Because of my scary delivery, would this be our only chance at being parents?  In the end, we knew that we had created this plan for a reason and needed to continue on that path. The next day upon discharge, I saw him again before leaving and wept. Even though I would come back to visit him, something felt so final about leaving without him.

That Friday we went to the attorney’s office at 9 a.m., and to be honest, her lack of experience on the subject made the experience so much more nerve-wracking and impersonal. She called me by the wrong name, had wrong information on the form, and just caused me so much more stress than necessary. I was so glad to have Mike by my side because I don’t know that I would have made it otherwise. Then came the inevitable moment of signing, knowing there was no turning back. This was it. After a few months of consideration, and an intense last week of hormones, pain, and fear, I signed my name on the indicated line, received a copy of the paperwork, and was dismissed from the office.

When looking back on those few days in my life, I didn’t realize the sadness I would feel almost 3 years later and how the tightness in my chest would return. That period was a blur, but it remains to be the most intense blur I think I’ll ever experience.

For more information on adoption or how to adopt a baby, visit Adoption.com.